Last night, for some reason, I wound up with a song stuck in my head. It’s actually a pretty well-known Mexican song from the 1940s, Besame Mucho. It’s been recorded by a lot of famous singers over the years, but the version playing in my head was never recorded. I first heard it on a subway platform ~25 years ago, when I was a teenager attending college in NYC.

The singer was a homeless man who’d sing at one particular station I passed through frequently. It wasn’t one of the busy ones downtown, but it was a transfer station where passengers would get off one train and wait (usually at least one song-length) for another train, providing small but captive audiences at regular intervals.

I can still remember his face. He was an African American man with a salt-and-pepper beard and weathered, leathery-looking skin. The whites of his eyes were noticeably yellow.  His huge smile revealed more than a couple bad teeth. He wasn’t much taller than I was. It was obvious that he’d lived a difficult life.

But his voice was amazing. In a way, he sounded like he looked: bluesy, raspy, gritty, real. He’d set his hat on the ground in front of him so passersby could toss in a few coins, and he’d stand there and sing a cappella, probably for hours. He had many songs in his repertoire, but the only one I really remember is Besame Mucho. I didn’t know that song before I heard him sing it, but something about beauty of the melody, the emotion in his voice, and the expressiveness of his face made it unforgettable to me.

I would drop whatever change I had into his hat. I don’t think I ever asked what his name was. I know I never asked him to tell me his story. And now, looking back, I wish I had, because there must have been a story behind a man who could sing such beautiful love songs, but always seemed to be alone.

I wonder if he ever imagined that 20+ years later, someone would still vividly recall his voice singing Besame Mucho, and still consider it one of the best renditions ever sung.

I’ve been to this page on my blog many times over the last few months… only to be stopped cold at that line: Add New Post.

Well, not that line, really… it’s the line right below it, the one with the ghost text prompting me that I need to “Enter title here.” I tentatively enter a few words and then delete them. Then a few more, and backspace again. I’m stuck. 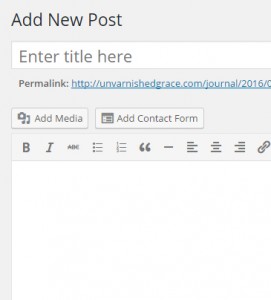 I want to write something. Anything. I wouldn’t be looking at this page at all unless I had some seed of an idea, some thought that I wanted to get out. And just an inch or so below that irrationally intimidating title line, there’s a big, open, empty, inviting place where I can just write. But my do-things-in-order brain won’t let me skip the title line and dive right into the body.

So I stare. And ponder. Then open another tab and move on to something else.

I like to write. And I hate to write. So today I’m adding a new post. It’s not perfect. It’s not pretty. But it’s here, because I need to write again. And even if all I can write about is the frustration of trying to write… at least it’s a start.