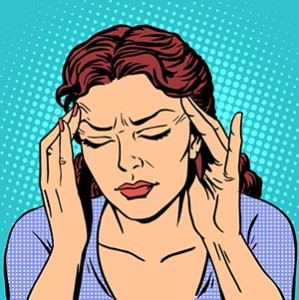 Does she have a headache… or is she trying to blow up your head?

Six weeks ago, at the beginning of October, I had a horrible, painful, concentration-breaking, sleep-depriving, nasty sinus headache. In the grand scheme of things, not really a big deal. I knew I’d get through it soon enough, I was just going to have to “tough it out.”

Unfortunately, it would appear that I’m not really that good at “toughing it out.”

By day three of my headache, I was getting pretty miserable. Over the counter stuff didn’t seem to be helping. I must have looked about as bad as I felt. My pastor (who is also my boss) noticed and asked if he could pray for me. I gladly accepted, but I wouldn’t have requested prayer myself. Pastor Nathan had just gotten back from visiting with several families in local hospitals. My silly little headache was so trivial and insignificant compared to what those folks were facing.

But right there in the front office/reception area, he prayed for me. And just as he was finishing, his next appointment walked in.

Even if the story ended right there, it still would have been a wonderful, positive experience for me. But it got even better, because the congestion and pressure that had been causing my headache broke up and the pain went away. I could breathe again. I could think again! And apparently, I looked a lot better too.

Even now, a month and a half later, I almost hesitate to write this phrase: but I was healed. I hesitate because I’ve been in churches where there’s a whole lot of bad doctrinal baggage around sickness and healing. I hesitate because in so many church circles, that’s a really loaded statement. And I hesitate most of all because I just have this fear that if I come out and say “I was healed” but then the next day I’m sick again… what then?

I’m not talking about a fear of looking bad in front of people. Lord knows I’m perfectly capable of that without any intervention, divine or otherwise! But here’s the thing: if I step out and tell others that I’ve had God answer a prayer, and then it somehow seems to get undone, how do I process that internally? Was I mistaken, perhaps caught up in the moment emotionally? Or did I do something to undo it? Does my failure to be healed (or some future illness) make God look bad to those who heard my story?

It’s easier to just not say it. So I didn’t.

Sometimes, when so much “big” stuff is going on around me, I almost feel guilty or even petty for bothering God or others with my “small stuff.” But today, I was reminded that God is big enough and cares enough to handle the big stuff AND my small stuff 🙂

The truth is, I hate intentionally vague statuses like that. I shared something significant without sharing anything significant at all! No one outside of my immediate circle had any idea of what I was really talking about.

I intended to blog more about it back then, but then, you know, life happened, and…

Fast forward to the last 10 days or so. The rest of October was a blur, preparing for “Hallelujah Night,” a carnival-themed Halloween Alternative event. It was a lot of work, but a huge success!

And then I got sick… again. A few days after the event, my stomach started giving me trouble. Nothing serious, I figured I had a bug or it was just all the activity of the previous month finally catching up with me. I dealt with it by trying to be careful about what (and when) I ate. Then this past Sunday morning, it was bothering me enough that I had to leave church as soon as worship was over, and I continued to have issues with it this week.

In our Wednesday evening services, we’ve been working through a series called Gospel Shaped Worship. This week’s topic happened to be prayer. Pastor Nathan shared that he had gone through a period where he was praying mostly general prayers instead of praying for very specific things. And while there’s nothing wrong with general prayers, and we do have to be careful to make our prayers more than just a laundry list of needs and wants, Pastor Nathan found himself challenged to pray more specifically again.

Sometimes we avoid praying specific prayers because we’re afraid we’re not going to get the answer we want. There are examples in the Bible of people who prayed fervently and did not receive what they prayed for. King David prayed that his baby would live (2 Samuel 16). Jesus has even prayed prayers that were not answered the first time he prayed them (Mark 8 / John 17).  When we realize that it’s OK to pray for things, even if we don’t get the desired result, that’s a very freeing thing. Prayer is supposed to be conversational, taking real issues to a real Father who really cares, regardless of what His answer is.

Bro. Nathan also used the story of praying for me with my headache in early October as an example of why we shouldn’t be afraid to bring everything, even the seemingly little things, to God. I had almost forgotten about that day. (How quickly we forget!) As he shared the story from his perspective, I was encouraged and convicted at the same time. I had been dealing with these stomach issues for a week and never once asked for prayer.

At the end of the service last night, Bro. Nathan asked everyone present to pray for him for a foot pain issue, then opened it up to anyone else who wanted prayer. More than half of those present asked for prayer, including me. It wasn’t a huge service, many folks were out of town, but I will probably remember it as one of the “biggest” Wednesday Night services of the year in terms of it’s significance. It was “healing” in more ways than one. It was authentic, genuine, laid back, raw, sweet. It was “church” in the truest sense of that word.

So how’s my stomach? I am feeling better today. I’d love to say it was 100% better, but it’s OK that I’m not there yet. It’s not about a result. It’s about a relationship.