I’ve been fighting what folks around here unaffectionately call “the crud” — a cough / congestion thing that’s making the rounds — for over a week now. Today it didn’t seem quite so bad, so I decided to run to the store to pick up a few things (mistake #1). And instead of going to the huge Walmart that I’m very familiar with, I decided to try a smaller grocery store that I hardly knew (mistake #2).

I hadn’t even been in the store for 5 minutes when it hit without warning: a coughing fit. Not a polite cough. Not even a short burst of typical “sick person” coughing. This was a feel-like-I-just-inhaled-an-entire-bottle-of-cinnamon-with-a-fire-ant-chaser out-of-control register-on-the-Richter-scale coughing. My eyes watered. I could hardly catch my breath. My chest hurt and I was afraid I might pass out or throw up because I was coughing so hard. I couldn’t stop. I tried to find an empty aisle to hide in but it was nearly lunch time and the store was busy. I tried to calm down and stifle the coughs but that only made it worse.

I just wanted to disappear. But a woman coughing up a lung in the middle of an otherwise tranquil grocery store will inevitably attract some attention. Which makes me try even harder (and with even less success) to control the coughing. I could feel my face burning, a result of both the coughing fit and the panic that rising in me from finding myself in a public place involuntarily “making a scene.”

I wound up hastily getting into the checkout line with my last tattered kleenex clamped over my mouth and less than half of my list in the cart. At least I didn’t have to worry about anyone hovering too close to me in the line this time! And I was relieved to finally get through the line and back to my car.

This is the closest I’ve come to having a panic attack in public in a couple of years now. Once I got back in my car the panic subsided, but the coughing fit continued even after I made it back home. So. Not. Fun.

And one of the items I didn’t manage to pick up on this trip? Yeah. Cough drops.

And No, I’m not going back out there.

UPDATE: Not long after I first posted this, there was an unexpected knock at my door. Thank God for local friends who read my blog & have pity on me! 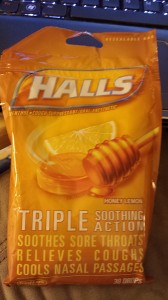