I’ve never really enjoyed being in the audience at a large event. The crush of people all trying to be in the same place at once is pretty much the opposite of what I consider “a good time.” Parades fall squarely into this category for me. Although I’ve assisted behind the scenes in creating floats for many parades, I’ve probably *attended* fewer than a 5 parades in my nearly 40 years, and participated in a parade (as in, drove, marched, or rode on a float) fewer than a dozen times.

This morning, I drove my church van in my area’s Dr. Martin Luther King Jr Day Parade. I’ve been a part of a couple of Christmas parades in my city, so I thought I knew what to expect: throw some candy and toys, dodge the unwanted candy the crowds inevitably throw back, try to keep the kids in my vehicle from falling out, and watch out for parade goers who might dart out in front of my vehicle.

From our position in the parking area where floats were lining up, we got to watch the majority of the other float entries and marching groups ahead of us as they reached the starting point of the parade. And what I saw (or perhaps, what I didn’t see) was a sobering reminder that even though it is 2014, racial divisions are still alive and well in central Louisiana. As I watched the marching bands and floats pass, I was struck by how few of the participants were white… and almost without exception, every adult white male in that parade was a politician.

My social anxiety temporarily gave way to a sense of sadness. I thought this would be more like Christmas. The pattern I noticed in the participants was amplified in the audience: very few white faces in the crowd. Where was everyone? MLK day is a school holiday. Some businesses stay open – but many are closed in observance of the day. So where did everyone go? I kept thinking that this should have been more like Christmas. But I also realized that it wasn’t really about the parade. This was just a symptom of a deeper racial divide, one that extends into businesses and schools and social organizations and especially churches. It’s voluntary segregation.

Jesus was the ultimate barrier-breaker. As Christians, we see Jesus’ birth as God bridging the immense divide between Himself and man. That gap should make any division between human beings seem trivial in comparison. How can we truly claim to be like Jesus if we’re not willing to reach out across racial divisions?

Hard to believe that it’s 2014 already! I wasn’t going to do any New Year’s Resolutions this year, but over the last few days I saw some folks posting about some year-long projects that they were getting ready to start… so I decided to jump in and set three very reachable goals for myself. Here’s a visual aid: 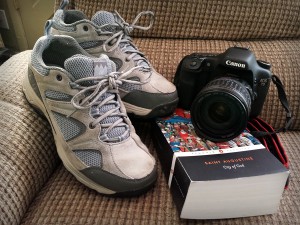 The first was a no-brainer… exercise! I won’t bother to make the diet commitment because inevitably I will fail at that. But I can commit to exercise more. I have a recumbant bike now, and my Fitbit to track steps taken during the day.

The next, and most intimidating (and potentially the most rewarding as well), is the photo-a-day project. I needed a good creative challenge, and honestly I haven’t been doing as much photography as I should… so this was a good fit for me. I’ll be posting some of them here, and more over on my Facebook page, but you can also follow me at http://365project.org/onepursuit where I’ll (hopefully!) be uploading a few pictures each day.

Finally, I saw some friends on Facebook talking about reading Augustine’s City of God in very small chunks over the course of the year. They set up a facebook group to discuss what we’re reading… so it’s kinda like a college class without the high pressure deadlines or the tuition 🙂  I’m looking forward to that too.

I didn’t realize it at the time, but after I posted this picture I realized that I’ve chosen goals that will challenge and enrich body, soul, and mind 🙂 Not bad for something I didn’t plan!